In relation to your own practice, how do you define the notions of dialogue and translation?

I prefer to think of translation as a mysterious thing, but not necessarily mystifying. Translation needs an oracle, a magician or priestess to change it from one thing into another. I once read that the work of a great translator is not to come as close as possible to the literal translation of the original text but to improvise, intuit even, another meaning adjacent to the original that is nevertheless faithful to the original in its own way. Give it a new shape, a new form and a new understanding. I literally did this with Sally’s vinyl drawings. What is perhaps interesting is that notion translation is literally (too literally, even) applied in the transformation of Sally’s vinyl drawings into my poems i.e. of nonsense into sense, in terms of being translated from meaningless markings into meaningful sense. I say this after observing the visitors oscillating between seeing/reading the poems, alternating from furrowed brows to ‘eureka’! As I understand the terms, both ‘translation’ and ‘dialogue’ are based on the premise that you are trying to communicate a clear idea to your reader/interlocutor. In my practice, generally speaking, this notion is up for debate. This brings me onto the notion of dialogue, the second part of your question. I was talking with Susan E Barnet at the opening about the ‘Take me with you, blindly…’ poem on show; she said it resonated with her because she picked up on “circus” and “cyclone” themes in the poem. As we got talking it emerged that for her Cyclone is a rickety fairground ride in LA that she fondly remembered being frightened on, for me it is a storm and that rages in a larger-than-life character, a lover, and the cause of my desire to temporarily tame it, “in my small lap”. Dialogue is therefore what comes after the work. Dialogue, if the work is good, is the result of the work. 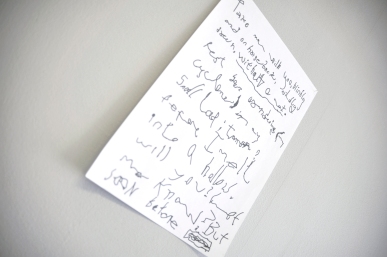 Take me with you, blindly, sculpture poem by Ana Čavić (vinyl on paper)

To what extent does miscommunication or mistranslation perform a role in your creative practice?

Miscommunication and mistranslation are, in a sense, part of the translation process itself. As I said above, for me, this is an essential part. I am interested in what is lost and gained as a result of miscommunication and mistranslation. Reading Stéphane Mallarmé, the French symbolist poet, in (English) translation, is fascinating to me. I even ‘read’ him in Arabic, a masterful translation by the Moroccan poet Mohammed Bennis. His poems are a beautiful car crash on the page, no matter the language. Or Apollinaire? His concrete poems, in French, are beautiful to look at even if you don’t read them, don’t translate them. They speak a visual language and not only of concrete poetry, but also of Guillaume Apollinaire’s own particular style of concrete poetry e.g. his dynamic shapes like the Eiffel Tower (Calligramme) piercing the sky of the page, his showers of words like the rain in Il Pleut etc. 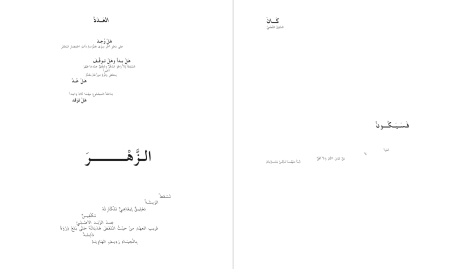 I think the starting point and perhaps the premise of our collaboration—Sally’s invitation for me to ‘translate’ her vinyl drawings—is in fact miscommunication and mistranslation. Sally’s vinyl drawing is a deliberate attempt to try to emulate the obscure and obfuscating drawing of Henri Michaux called Alphabet (1927); an illegible set of non-letters that bare a resemblance to letters. Sally made several attempts at re-drawing Alphabet, by studying it and looking at it in the manner of a life drawing, only using a Wacom Inkling that digitally plotted the drawing into a vector graphic. Sally hoped to capture the flow and rhythm of Michaux’s mark making through repetition, to develop a sort of shorthand for Michaux and try to understand his intention by following his text to the letter, so to speak. I don’t think she had the intention of translating it in the traditional sense. Rather, like the concrete poems I mentioned above have a visual signature of their author, in that sense I would say that Sally ‘translated’ Michaux. 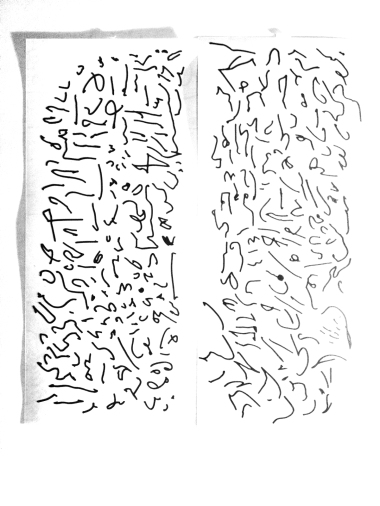 So, from the outset, there is Michaux’s illegible source image/text, translated by Sally into another illegible image/text. My role in the collaboration begins at this point and is the start of another dialogue as well as another translation. I think what I did with Sally’s vinyl drawing is the most violent thing you could do to it: take it out of its liminal state of image/text and turn it into text. Although you can read them, the poems do not lay bare all their mystery, their obscure origins make them seem strange, the letter forms are crooked, crammed onto the page and generally unfit for purpose. They are malformed material. In them, I am addressing an impenetrable lover as Sally’s was addressing an impenetrable Michaux; but both of us are ultimately addressing the audience with this idea of ‘impenetrability’. The works on show, which also include Sally’s vinyl sculptures (tightly packed balls of leftover vinyl from the vinyl drawing) and the five graphite drawings of these vinyl sculptures are as open to mistranslation and miscommunication as my poems. The vinyl sculptures and the graphite drawings are tight fists of unfathomable material and Sally’s meticulous drawings of the vinyl sculptures only reinforce their mystery. But there are ‘eureka’ moments in the show—one visitor mentioned how pleased they were to have figured out a difficult word in one of the poems and another was delighted to have identified a vinyl sculpture on the table from its corresponding drawing on the adjacent wall. So to go back to notions of translation and dialogue, I would say that they really become relevant only at the point the work is on show.

Within both dialogue and translation, does the concept of ‘loss’ have any function and meaning?

In relation to the poems in the show and the process of translation I used in transforming them from image into text, I would say this: what is lost is metamorphic elasticity, impenetrability, and mystery; what is gained is still the same—only now you can read it. 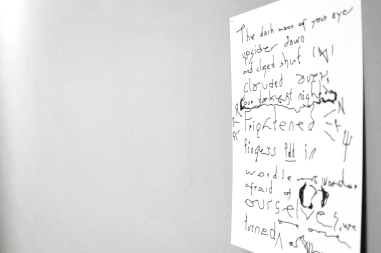 The dark moon of your eye, sculpture poem by Ana Čavić (vinyl on paper)

Would you argue that loss has a transformative power in dialogue and translation?

This show came about at the same time as our collaboration for a forthcoming book which features an essay by artist Lousia Minkin and works by artists Susan E Barnet, Sally Morfill and myself that thematically touch on this question of ‘loss’. Each of us deals with this idea of loss: what is lost in translation; recovering and reconstructing what is lost from fragments that remain; recovering from, and compensating for, loss. Loss is central to the creative process. I could not imagine getting out of bed in the morning without the presence and sense of loss. It is a great motivator! It operates on the subconscious, unconscious, and conscious of our psyche. It is all around us, all of the time: in psychoanalytic theory; in philosophy; in aesthetics and so on. Loss is inevitable in both dialogue and translation, for practical reasons i.e. some things are untranslatable (e.g. a phrase in one language may not have an equivalent in another) or the way listening is also a process of filling in gaps in speech. But this can be an opportunity to employ creative strategies to recover what is lost. Working with Sally’s vinyl drawing I was working with found material in the readymade sense, and that already implies all sorts of notions of loss. The process of making this work was a process of transformation, and not only from image into text.

For more information about the line that (…) please click here